In Athens half day tour, we visit popular sightseeings located around Athen’s downtown. This tour is private for small groups up to 8 persons. As we drive around, we make a stop at the following places of cultural and archaeological interest such as:

The Academy of Athens is Greece’s national academy and the highest research establishment in the country. It was established in 1926 and operates under the supervision of the Ministry of Education. The Academy’s main building is one of the major landmarks of Athens.

The National Library of Greece is situated near the center of the city of Athens. It was designed by the Danish architect Theophil Freiherr von Hansen, as part of his famous Trilogy of neo-classical buildings including the Academy of Athens and the original building of the Athens University. It was founded by Ioannis Kapodistrias.

The Panathenaic Stadium or Kallimarmaro (“beautiful marble”) is the only stadium in the world built entirely of marble. Ιt hosted the opening and closing ceremonies of the first modern Olympics in 1896 and was the venue for 4 of the 9 contested sports. It is the finishing point for the annual Athens Classic Marathon. It is also the last venue in Greece from where the Olympic flame handover ceremony to the host nation takes place.

The Hellenic Parliament is the parliament of Greece, located in the Old Royal Palace, overlooking Syntagma Square in Athens. The Palace was designed by Bavarian architect Friedrich von Gärtner for King Otto of Greece and his wife, Queen Amalia, with funds donated by Otto’s father, King Ludwig I of Bavaria. The Hellenic Parliament has been housed in the Royal Palace, since 1934. The Parliament is the supreme democratic institution that represents the citizens through an elected body of Members of Parliament (MPs).

The Zappeion is a building in the National Gardens of Athens in the heart of Athens, Greece. It is generally used for meetings and ceremonies, both official and private. In 1869, the Greek Parliament allocated 80,000 square metres (860,000 sq ft) of public land between the Palace Gardens and the ancient Temple of Olympian Zeus, and also passed a law on 30 November 1869, “for the building works of the Olympic Games”, as the Zappeion was the first building to be erected specifically for the revival of the Olympic Games in the modern world.

The Acropolis of Athens is an ancient citadel located on a rocky outcrop above the city of Athens and contains the remains of several ancient buildings of great architectural and historic significance, the most famous being the Parthenon. While there is evidence that the hill was inhabited as far back as the fourth millennium BC, it was Pericles (c. 495 – 429 BC) in the fifth century BC who coordinated the construction of the site’s most important present remains including the Parthenon, the Propylaia, the Erechtheion and the Temple of Athena Nike.

The Acropolis Museum is located right next to Acropolis Metro Station and at a walking distance from the ancient citadel. The Museum hosts archaeological artifacts found on the rock and the surrounding slopes, from the Greek Bronze Age to Roman and Byzantine Greece. It also hosts several exhibition programs and events. Visitors can glance over 4000 artifacts, buy gifts and books related to Acropolis from the Museum shops and enjoy a nice cup of coffee or lunch at the Museum’s restaurant,  with a panoramic view of the Acropolis.

Optional: for €50 extra, we can go shopping at Plaka for an hour, before we drive back to the Hotel. 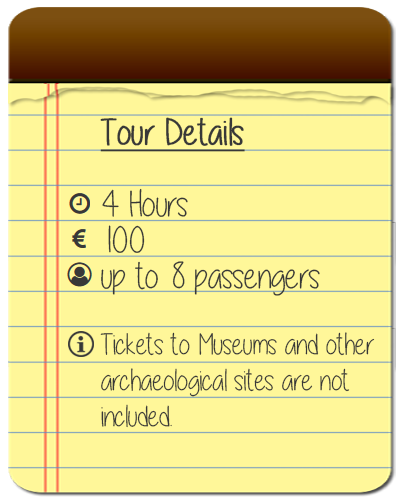